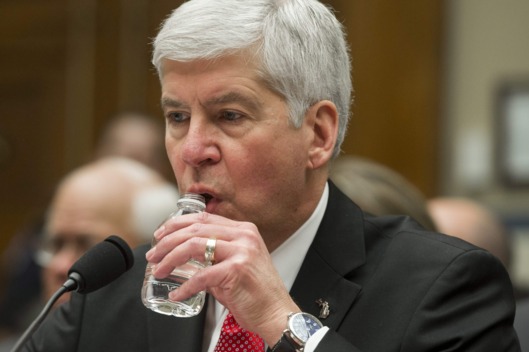 Is PR still playing a role in managing the crisis in Flint, Michigan, and if it is, how effective is it? You may remember that at the beginning of the year, when the story of the water-poisoning in Flint was breaking-big, we took a look at the situation and the major players, vowing to return to check for any progress, any possible misery mitigation, for the people of Flint and Genesee County and the replacement of the damaged and worn lead pipes.

As background, this all began in April 2014, when Governor Rick Snyder’s Republican administration’s state-appointed emergency manager decided to save money by switching from the Detroit Water System to the Flint River for water supply to Genesee County and the City of Flint.

Residents complained about the discolored water. People, especially children and infants, fell ill. Dr. Mona Hanna-Attisha doggedly pursued the medical problems arising from the poisoning.  Still, state officials claimed the water was safe to drink. It would be another 18 months before Republican Governor Rick Snyder’s administration acknowledged that there might be a problem. Lead, a known and potent irreversible neurotoxin, poisoned the people of Genesee County and the City of Flint, Michigan.

Follow his hiring of Jerrod Agen as Chief of Staff, Snyder promptly hired Mercury llc, a public affairs company whose principals are known for staffing Republican Party campaigns. Agen’s wife Bettina is a Senior Vice President at Mercury. Snyder was forced to set up a task force to investigate, and that task force found the state government responsible, with the Governor as the ‘Buck stops here’ man.**

Mercury claims that their strategies put their “clients ahead of rapid political and regulatory changes, competitors, critics, and changes in the external environment.” So what has changed, if anything, for the Snyder administration?

Well, for starters, there is now a movement rooted in political activism to recall Snyder.

Rev. David Bullock of Detroit’s Greater St. Matthew Baptist Church is the author of the Recall petition, and organizers have only 60 days to collect 790,000 valid signatures from registered voters to get the recall on the ballot in November. The Reverend claims that people from all political parties and social strata are supporting his petition because they believe that ‘Rick Snyder’s got to go.’*

When forced to acknowledge the water poisoning issue, Gov. Snyder set up a task force, whose findings blamed the state and the emergency manager for the crisis. A recent poll found that 69% of likely voters hold an unfavorable opinion of Snyder’s leadership, while 52% hold an unfavorable view about the governor himself. MSNBC conducted an online poll of 2700 people in March, in which they posed the question: Should Michigan Gov. Rick Snyder Resign over the Flint Water Crisis? 87% said yes.

While acknowledging the recall movement, and the influx of volunteer workers replacing the worn lead pipes, it’s clear that the City of Flint, Genesee County and the water crisis are no longer in the headlines.

The Mayor of Flint, Karen Weaver, has dropped out of sight, and where are the celebrities now?

Flint and the water crisis has received no ink over the past two weeks. There could be many reasons for that. The news cycle is a living organism, it needs to be fed frequently. It could be that other news topics have taken priority in Michigan, in the United States.

It could be that Mercury are really, really good at what they do.

Margaret Mulvihill is Director of Communications at Lawson Mulvihill Media Inc., in Washington, DC.  Follow her on Twitter: https://twitter.com/political_pr

** Snyder’s own words from the Jan. 19 State of the State address, when he apologized for the state’s role in the lead poisoning of Flint’s drinking water:

“Government failed you: Federal, state, and local leaders by breaking the trust you placed in us,” Snyder said in the formal address. “I am sorry most of all that I let you down. You deserve better. You deserve accountability; you deserve to know the buck stops here with me.”