The Politics Of War

After some lengthy discussions with pro-Zionists, I’ve decided it’s time to address some of the propaganda being spouted by them, the US Media and of course the IDF.

I’ll address these in reverse order, starting with the human shields quote from Hilary Clinton.

Whenever I hear this line it’s clear to me the person speaking has never seen Gaza before. They’re speaking like a person who has never even spoken to a Gazan on the ground during the current conflict, or a Gazan who was in the area during any of the conflicts over the past decade or so.

When you attack civilian areas, you kill civilians. When you purposely attack schools, hospitals, apartment buildings, food markets, you kill civilians. According to Beit Salem, an Israeli Human Rights Group which tracks Israeli and Palestinian deaths in the region, dozens of children as young as four years of age were killed by gunshot wounds to the head, neck, and chest. By now we’ve all seen videos of snipers killing ambulance crew and rescue workers, ambulances and hospitals being bombed repeatedly. One such video details an attack on two ambulances attempting to offer support to the local Gazans. The video showed ten bombs often landing within a minute apart in what was clearly a calculated attack.

There was no Hamas members here. There were no weapons on the ambulances. It was a blatant war crime against innocent civilians.

Moving on to Hannity’s quote regarding 3,000 rockets fired from Hamas into Israel. Ask yourself why is there no running total on the firepower used by Israel? Israel have deployed drones, tanks, f-16 fighter jets, and cannons which have fired rockets, missiles, tank shells, cluster bombs, white phosphorous bombs (illegal when used in civilian areas), bullets, cannons shells and grenades.

It’s impossible to continue to answer the Hamas rockets question, without addressing Obama’s quote where he states Israel have a right to defend itself.

Hamas exist as a defensive need. The Palestinian people are an occupied people. They didn’t invade Israel, they didn’t strike at Israel first. Israel didn’t even exist until the 1940s. Since it’s foundation it has been stealing land from Palestine. 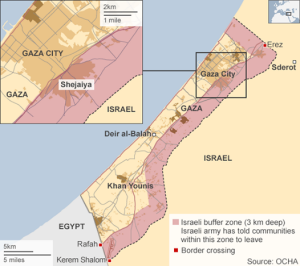 Let me ask you a question: If you occupied a legitimate nation, crippled their trade and placed an economic embargo on them, humiliated them daily, considered them sub human and treated them as such, controlled their water, electricity and food supply, stole the most fertile land from them and banished them to live in slums, knocked down their buildings and replaced them with your own, murdered them in the street in broad day light, shot their children, bombed their mosques, schools and businesses, destroyed their crops and threw thousands of them in dungeons and then they fired rockets at you – do you really believe you can use their defensive rocket fire (which is extremely ineffective) against your tyranny as an excuse to obliterate them?

Israel has been mass murdering Palestinians since the 1940s, long before rockets were fired in self defense and long before Hamas even existed. So this is nothing but a fallacy designed to deflect the reality of the situation and mislead others.

Finally, with the US behind Israel the world is powerless. The US gave Israel over 100 billion dollars between 1947 and 2006. Up until 1996 the figure was 62.5 billion dollars. The US helped create this state, fund this state, and have essentially created this monster. Israel started out on the left but has completely changed into a fascist regime.

This whole episode has highlighted how futile world politics actually is. The entire occupation is against the Geneva convention. They’ve broken the Geneva convention several times by their actions in Palestine, and that’s ignoring the bombing and murdering they’re doing. Tell me, what gives an oppressor, a land stealer, an aggressor, precedent over the oppressed from defending themselves? The US and Israel’s stance is amoral.

Israel started all of this. Not the Palestinians. Not Hamas. Israel has one of the most well equipped armies in the world and it is using all its might to crush a defenseless people that Israel has penned into what I already described as the largest concentration camp the world has ever seen.

Netanyahu has point blank refused to allow the Palestinians their own state, the best he offered them was apartheid South Africa style Bantustans where Israel would still control them militarily.

The Americans don’t even understand what that is like. Constant oppression. It’s a giant prison, a ghetto. The US are asking if Israel is really the bad guy here? Yes, they are! They created this entire situation because of some crazy religious Zionist ideal that they are gods people.

Nazis said they were the master race. Israel say they are gods chosen people. The similarity is shocking.

If Hamas downed weapons in the morning, Israel would not stop – they would not want to give Hamas a chance at regrouping and rebuilding. Israel will not stop until the Palestinians are wiped out and the land is theirs.

There is no excuse for the slaughter of innocent civilians in this manner. None.